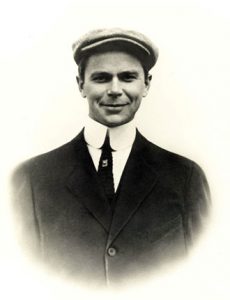 Rudolph Dirks (* February 26th 1877 in Heide, Germany; † April 20th in New York, USA) was a German-American comic pioneer. By creating “The Katzenjammer Kids” Dirks established one of the first and oldest comic-strips in the world that is still published today.

Dirks family emigrated to the US in 1884. They settled down near Chicago. In 1897 Rudolph Dirks published his first strips in the Chicago satire magazine “The Cricket”. Shortly after he moved to New York. When he started to work for Rudolph Hearst’s “New York Journal”, he was asked to design a comic strip able to compete with the “Yellow Kid” in Joseph Pulitzer’s “New York World”. Dirks drew inspiration from “Max und Moritz” by Wilhelm Busch. However, he soon developed a very different way of storytelling and illustrating and as a result invented some comic elements that where truly innovative in his time. Amongst other things Dirks is said to be the first to use sound words and motion lines.

Rudolph Dirks also made history by being the first comic artist to fight for his author’s rights after creating his comic strips for Hearst for over 15 years. In the end Hearst kept the rights for the name “The Katzenjammer Kids”, but Dirks was allowed to continue to use his characters under the new title “The Captain and the Kids”.

Due to his carrier as a comic artist and his achievements in this art form and the author’s rights for artists, Dirks is one of the true pioneers of graphic literature, as we still know and love it today. 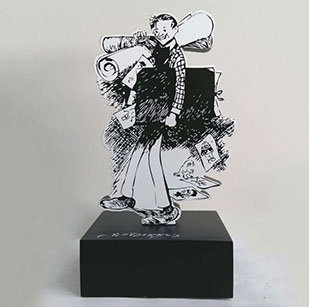 The award is deliberately kept black-and-white and two dimensional as a homage to the classic instruments of graphic literature: an idea, a piece of paper and a couple of pencils. The statue weighs about half a kilo (1,1 pound) and has a height of almost 25 cm (9,8 inches).

The Rudolph Dirks Award honors the best publications and artists in graphic literature and are presented at the end of each year during GERMAN COMIC CON Dortmund.

Best artists (by origin)
In contrast to serial publications or single titles the second block awards artists who got at least one recent German publication. The categories are arranged by continents. In each region the best illustrator as well as the best scenarist will be awarded. There are six regions and twelve award winners in total.

The Rudolph Dirks Award is an industry/jury award, not an audience award – meaning the award winners will be chosen by a selected short-list-jury as well as a body of experts (i.a. staff members of comic book publishers and associated sectors, journalists, cultural managers and comic creators) consisting of at least 100 members. 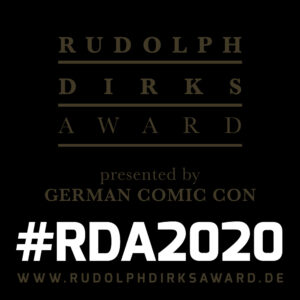 Through the Rudolph Dirks Award and its various categories the GCC wants to draw more attention to the art form of graphic literature, which currently experiences a true “diamond age” – not only because of the highly popular genre of superhero comics, propelled into a mass medium by numerous successes on the big screen, but also due to a rising and newly discovered variety and quality of different genre and styles.

With a focus on honoring the most prominent and influential creators of this new era, the Rudolph Dirks Award will also provide some surprises and new discoveries. 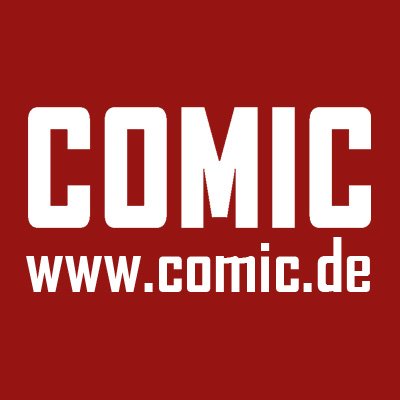